Abbott ePublishing has published online the first five chapters of each completed book of the New Testament they have completed in their groundbreaking Tyndale21 Version. 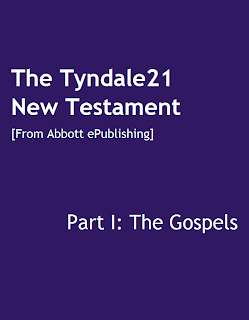 The Abbott ePublishing Tyndale21 Version of the New Testament Gospels, which was released July 1, 2011, is an updated, modern English version of the first printed English Gospels translated by William Tyndale in 1526.

Now, Abbott ePublishing publisher and owner Stephen Abbott says the company has decided to release work on the second phase of the project as it’s completed on its website at http://www.abbottepub.com/tyndale21first5.html

“Due to overwhelming interest in this project, we’ve decided to release a large part of the revision project to the public at the time the other books of the New Testament are completed,” said Abbott, who is overseeing the revision process. “The first five chapters of each book will be published online.”

For many of the Letters of Paul and the General Letters, that means entire books of the New Testament are now posted online free of charge.

Completed books include the Four Gospels of Matthew, Mark, Luke and John, as well as, in their entirety, the Pauline Letters to Titus and to Philemon and the General Letters of James, 1 John, 2 John, 3 John, and Jude.

The electronic book containing the full four Gospels is being sold for $2.99 on the company’s website, www.abbottepub.com/tyndale21gospels.html in Adobe Portable Document (.pdf) format, which can be loaded onto most e-reader devices such as the Amazon Kindle and Microsoft’s iPad.

Abbott ePublishing was launched in 2009 as a New England-based publisher of original, affordable electronic books. They can be found online at http://www.abbottepub.com.