Your city has just been devastated by a massive natural disaster. So what do you do? Why, you swear on local radio and condemn the president of the United States, of course. 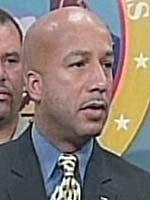 New Orleans Mayor Ray Nagin, employing several colorful expletives, went on a local AM radio station Friday to condemn the president and federal authorities whom he believed had botched the rescue operation.

And maybe they had. That remains to be seen. The fact is, an unprecedented amount of supplies were arriving almost as he was on the air. Still, questions remain of FEMA and state emergency agencies, and they will be answered in due time.

While it may be understandable for Nagin to react emotionally to a delay in supplies reaching the beleaguered city, it's not okay to lash out publicly in this manner during a crisis if he's it's leader.

Whether you're the spokesman of a company in trouble or a city in chaos, it's important to convey calm and control, and if urgency needs to be conveyed, it should be done calmly, competently, forcefully and eloquently.

For a public official to publicly "lose it" is the worst possible outcome. It conveys a sense of panic in the individual, and does not reasure others that all will turn out well in the end.

Regardless of the circumstance, a crisis management spokesman must keep his or her "cool" at all times.
Posted by Stephen at 12:29 AM

I have to respectfully disagree. I just interpreted your very own words to contradict your intended message:

"It conveys a sense of panic in the individual, and does not reassure others that all will turn out well in the end"

from my standpoint, that was the precise message that was meant to be conveyed and SHOULD have been conveyed..at that particular moment....the conditions in his city were deplorable, dangers, and disgusting, with no tangible evidence that things WOULD turn out well...and umm I certainly would not say things turned out well, not even close to bad, even.. it surpassed my worst nightmares.

you also stated: regardless of the circumstance, a crisis management spokesman must keep his or her "cool" at all times.

-- I suppose I am way too fixated on the tragic images, but "circumstance" doesn't quite capture what was happening...not at all.

and finally, I just can't understand the expectation that one should adhere to some human emotional rule book in dealing with such tragedy. What is the protocol of dealing with a disaster of this magnitude? and if one can't keep his or her "cool" or can not stay in compliance of such a protocol, should we indict them? when we have NO IDEA what they experienced, felt, touched, smelled, or witnessed?

I hope you NEVER experience what some of these people have endured, to see exactly how you would react...if you, at any point, could not keep YOUR cool, I could totally understand why.

Thanks for your comment. The points were well taken.

This clearly isn't like any other crisis in our history, so I do understand the heightened emotions that were involved.

But as a general rule, one doesn't go on TV or the radio and swear at, or about, anyone - especially those whom (should) be helping you.

The fact that this conveyed a sense of panic in Mr. Nagin was apparently an accurate portrayal. He was quite panicked about the the response. And while I understand why he reacted this way on a human level, I don't accept it as the best course of action for him at the time, as an elected leader of a city.

In this incident, I don't think history is going to be kind to Mayor Nagin, just as it won't be kind to Gov. Blanco, FEMA - and it's then-leader Mr. Brown, or even, sadly, Pres. Bush (where the buck ultimately must stop.)

But the reason Mr. Nagin was pulled out of this crowd by me for special attention is his appearance on that radio show. Granted, it was probably the worst time of his life. I have sympathy for him, but can't condone how he lost his cool, spreading a panic that had already taken root.